How Amazon’s Fee Increase Can Actually Save You Money

Amazon has more than tripled their FBA storage fees for November and December. *Cue meltdown* WHYYY?

In 2015, FBA volumes, growth rates, and inventory levels were very high. As a result, our U.S. fulfillment centers were very full in November and December. This fullness was driven in part by FBA inventory that did not sell until well into 2016.

To avoid potential capacity constraints during the 2016 holiday season, we are accelerating the expansion of our fulfillment capacity. Additionally, we are changing our FBA fee structure to encourage all sellers to send in and store products in November and December that are likely to sell by the end of 2016. To give you time to plan for these changes, they will begin to take effect on October 1, 2016.”

Monthly storage fees apply to all units in Amazon warehouses. However, single units are exempt from long term storage fees.

But, it’s not all bad news. Amazon also announced that they are reducing storage fees for October, and reducing weight handling fees in November and December.

Ok, so what does this all mean? I’m using the word “fees” a lot, which is making you nervous.

Get Your Inventory Into FBA Early

Q4 is BUSY. Amazon doesn’t want to be processing seller shipments when they could be processing customer shipments. If I were a betting man, I would wager that some sellers will be sending in lots of small, frequent, last- minute shipments to try to get around this storage fee increase. Does this sound like a perfect storm for FC transfer times and FC processing delays?

This is why Amazon has reduced the storage fees for October. They want their sellers to get their inventory in before the mad rush of the holidays. You need to start planning for this now.

We’re already seeing Amazon suspending shipments of certain ASINs. If they think they have too many in their warehouses they won’t let you send more.

Know Your Sell Through Rates

Do you know how many units you sell, on average, per day?
What is your sales growth rate?
Do you have data from last year’s holiday period?
Is your product “gift-able”?
How much safety stock is it economic for you to keep in FBA?
You need to answer these questions to know what to send to Amazon for Q4. Because Amazon are right; It is not economic to hold piles of slow moving stock. As long as you are warehousing product that will sell, these fee changes will not have a negative effect. 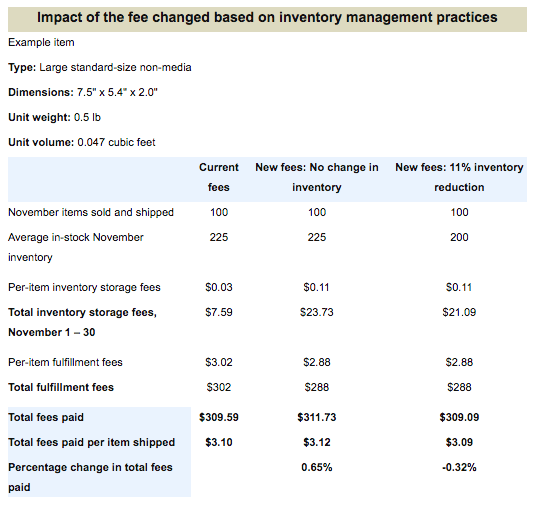 Get Slow Movers and Unknowns Out of The Warehouse

Not sure what a product’s sell through rate is? Then it doesn’t belong in FBA in Q4. Amazon does not want your slow moving items taking up space in their warehouse.
From the horse’s mouth, aka Amazon’s spokesperson, Tom Cook “with this change in fees, [Amazon][/Amazon] hopes to make it so that, during the fourth quarter, its fulfilment centres only have items that will be sold over the holiday season”.

To recap, test your new products in the off-season, remove slow-moving items, and be ready to scale confirmed sellers for the holidays.

And remember, this is only for 2 months.

Leah has over 7 years of ecommerce experience, as an operations manager and then ecommerce consultant. She co-created the Amazon Appeal course  with Chris McCabe and they  are currently working together on a new one (or two).

She takes full advantage of working online by living as a digital nomad. If you see her in a co-working space, come and say hi.

This site uses Akismet to reduce spam. Learn how your comment data is processed.